Every year for the past four years I’ve dedicated a week of my life to competing in the Greatest International Scavenger Hunt the World Has Ever Seen (gishwhes), which is even bigger and weirder than it sounds. It was started by Misha Collins, actor on CW’s Supernatural and co-founder of Random Acts, a non-profit organization that ensures anyone, regardless of financial situation, can help make the world a better place. Gishwhes is based off of the University of Chicago scavenger hunt, which Collins participated in while attending the university – except bigger and weirder, of course. For a week in August, fifteen people in teams all around the world come together to produce creative content and accomplish tasks in an escapade of breaking social norms, pushing their own boundaries, and spreading kindness. In either competitive or for-fun teams, members try to conquer a list of over 150 items asking for photo or video evidence of someone on the team accomplishing the task. Winners join Collins for a fun excursion abroad; previous winners have gone to a castle in Scotland and sailed on a pirate ship on the coast of Croatia, and this year’s winners will be headed to Iceland. Every year the bar is raised higher for quality of items, and even celebrities are in on it – whether they know it or not.

I always look forward to this week of sleep deprived creative insanity, but this year was remarkably different. Every year, gishwhes has given me something; whether it be a new appreciation for sleep or new friends that have become my extended family, gishwhes has always been a highlight of the year. I’ve never ended a hunt and felt as if I was done playing this annual melee of creativity and boundary-pushing weirdness for good, but besides coming off a three-year stint captaining a for-fun team to join a competitive team as a regular member, this year felt special.

I loved captaining a for-fun team. We always welcomed first timers who wanted to try out gishwhes without feeling as if they were bringing down a highly competitive team with inexperience, testing the waters to see if this absurd event was something that they would want to take a week out of their year to seriously compete. I had a wonderful time, met great people, and was blown away by things my team and others could come up with or would be willing to do, but there were some down sides. For every amazing, hard working team member who made the hunt worth doing every year, there were no-shows, people who didn’t mesh with the rest of the team, or bad attitudes. After trying to run a team while in the middle of moving in 2015 and experiencing a run of bad luck with my lovely teammates dealing with personal catastrophes (2015 was a bad luck year for us, and I still send giant hugs to my team for coming through despite the multiple acts of god standing in their way), I just needed a break. I hated to think that I had gotten so frustrated by the process of dealing with items that needed to be completed last minute and people taking up a space on the team and contributing nothing that I didn’t even want to participate anymore – even though I had so many great for-fun team members. I needed something different to reinvigorate my love of the hunt, and I knew the first step was stepping away from the stresses of captaining a team.

While I was debating on how I was going to even do the hunt, or if I wanted to at that point, a friend and team member from the previous year messaged me to say she was starting a competitive team. The timing felt perfect, so I meekly asked, “Can I join?” It was quite possibly the best decision I’ve made in all my years as a gisher. Taking a cue from a few of my captaining tactics and stepping it up with some serious organization, Chandra went above and beyond prior to the hunt to make sure we knew each other and who was capable of what. And it turned out that our team meshed incredibly well together. We were all crass, either quietly or overtly, and had more nsfw conversations than necessary – which is kind of perfect. Everyone on our team was the perfect balance of competitive and super chill, serious and fun, shy and completely perverted, extremely talented and resourceful. We all-capsed at each other, laughed our asses off, and decided before the hunt actually started that those who could were going to meet up at a Supernatural convention in Seattle next April. Keep in mind that I’ve done this for four years and have great friends that have come out of gishwhes, but there was something about this group  in particular that clicked so incredibly well. Every member, even those that joined at the last minute, folded into the cool kids club. We were awesome. We were trash. We were going to Iceland. 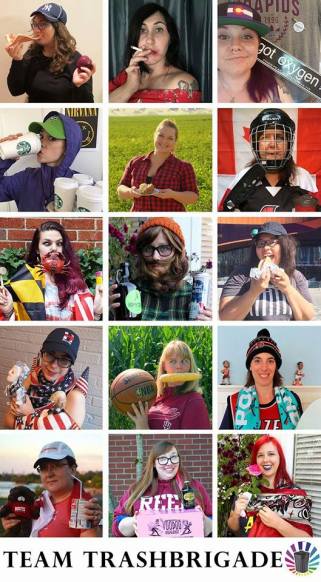 The 2016 hunt was from July 30th through August 6th. Team TrashBrigade consisted of our captain Chandra, team mom Janet, Melissa, Jessica, Maddie, Cookie, Danitra, Christy, Kai, Nicky, Nat, Alison, Steph, Raelee, and me (Ash). Chandra was the best captain a gisher could ask for. Not only was she supportive and deferred to the team for decision making, she pushed herself to the brink of sanity (never speak of the lutefisk), working with Janet, Melissa, and Jessica (all of which I cannot say enough about) to completely slay a huge amount of items, starting off day one strong by stumbling upon an abandoned train and obtaining a Victorian dress for an item I thought would be hard (classic dumb-Ash). Kai blew us away with her artistic abilities and gave Misha’s mom an honorary TrashBrigade member certificate. Christy did some charity work and created an all-holiday family dinner that rivaled The Last Supper in awesomeness. Nat was so in it that she had to keep herself from berating people at work for talking to her about things that weren’t gishwhes-related and made it onto the news. Maddie, on top of items like sewing cabbage into a cheerleading outfit, uploaded and submitted the completed items at the end of the day. Alison drove over an hour last-minute to have a tea party dressed as a teabag in a teacup ride. Raelee and Stephanie were too sweet and adorable for words, knocking items out left and right. Nicky jogged on an airport walkway, helped wrangle items and organization with Maddie and Nat, and understood twitter better than all of us. Danitra had a birthday party for herself, complete with cake, on a New York subway train. Cookie is a photoshop master, which we knew going in, so she took Matt Cohen’s abs on vacation in the best ways possible. And with my friend Mercy, who flew up to Colorado from Texas to keep me company the first few days of the hunt, I claimed Pikes Peak for gishwhes. I can’t say enough good things about these ladies. I mean, I could, but you would be like, “Okay Ash, we get it! You love them! Moving on!”

Majority of our team – eight members – were first-time gishers. With such little experience, you wouldn’t expect the quality of items produced and sheer number of items completed. I thought being on a competitive team would be stressful, but as the gish-clock ticked down, I went to bed early for the first time. I wasn’t up at the last minute trying to scrape something together. I was relaxed and felt confident that we had done an amazing job. All fifteen of our members were highly active, kept connected through chat and our facebook group, and worked together to get the best possible item for our team to submit. We cheered each other, stepped up when things weren’t working out, and had so much fun.

Ending this year’s hunt, I can say that this was a completely different experience than I was expecting. Going in, I was nervous and wasn’t sure what to do because I wasn’t running a team. Then I realized what a whole team can accomplish – something I hope my awesome teammates from previous years found in their hunt this year. We’re all exhausted, but we’re still finding ways to make each other laugh in our group chat and putting together bloopers of our mishaps (gishaps?). After seeing what we produced, the good we put out into the world, and with how close our team still is after all the madness, all I can think is this is how you gish.

Ash is a writer of fiction and non-fiction living in the Denver area.